St. Charles resident Kathleen and her husband Greg recently celebrated 37 years of marriage, so we sat down with Greg to get the inside scoop on how these two with noses for news found one another! Where did you and Kathleen meet?
We met in 1982 while we were both working at WLS-TV. She wrote and produced the editorials the station aired in those days….I was the business manager in the News Department. She had to come to me to get approval each week to use some of our studio production time for the Editorial Department. She had me the first time she attempted to make a copy of something at the coffee machine!

Where was your first date?
I honestly don’t remember. But we used to go out drinking at different places with a group from the newsroom each week. I suppose that would be it. Kathleen & Greg on their wedding day

Where did you get married?
We got married on May 19, 1984, at Holy Name Cathedral in downtown Chicago.

How long have you been married?
As of two and a half weeks ago, we’ve been married for 37 years.

Any funny or poignant anecdotes surrounding the wedding or marriage?
In my attempt to control all things, I asked her in the restaurant at the top of the Hancock, that IF I asked her to marry me, what would she say. She said she would say ‘yes’. I wanted to have things just perfect for the REAL proposal, so I just said that’s good and dropped the subject. A few weeks later, I was ready with the ring and everything. We went back to the top of the Hancock, got a special table by the window…and then I proposed after dinner. She was really surprised and reluctant to say yes. Seems like when I dropped the subject a few weeks before, she thought that was it…and started making other plans! I was crushed. A few days later she said yes. 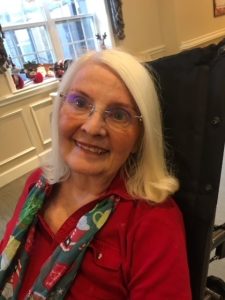