You may be surprised to learn that Alzheimer’s is the fourth leading cause of death for African Americans, but only the sixth leading cause of death among whites. It is also often referred to as a “Silent Epidemic” among African Americans, due largely in part to an unwillingness to fully acknowledge and openly discuss the disease, which can lead to delayed medical care and caregiver burnout of family members attempting to bear the burden alone. But what else could account for such a disparate racial impact? According to research, there are a number of risk factors which may hold the clues.

Most obvious is that minorities, especially African Americans, are vastly underrepresented in dementia research. Scientists have been challenged by the fact that they are largely unwilling to donate their brains to research or participate in brain studies. This may be linked to a long-standing mistrust of the healthcare system. “A lot of minority communities still feel that research involves being a guinea pig. Nobody wants to be used. Nobody wants to be a guinea pig,” notes Rush Alzheimer’s Disease Center neuropsychologist, Lisa L. Barnes. This lack of critical data poses a difficult problem for researchers and scientists. 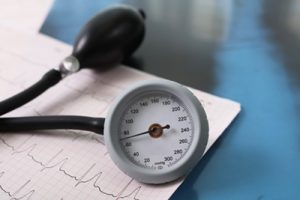 The second factor is related to the increased prevalence of certain vascular-related medical conditions and diseases among African Americans. Hypertension, type 2 diabetes, stroke, and high cholesterol, among other diseases, are seen in greater numbers among African Americans. Poor midlife vascular health is widely believed to be linked to dementia, so the significance of the connection between increased vascular disease and a greater likelihood for developing Alzheimer’s disease in this population cannot be understated.

One major new research development seems to indicate a difference in the behavior of tau proteins associated with Alzheimer’s in African Americans. There is no difference between races when it comes to the formation of brain plaques, however, a recent study found that while spinal fluid from African Americans contained lower tau proteins (tau tangles are associated with Alzheimer’s), it did not necessarily suggest a decreased risk of developing the disease. “It implies that the biological mechanisms underlying Alzheimer’s disease may be very different in racial groups. And if so, the way we try to diagnose and treat may be race-dependent,” says Dr. John Morris, one of the authors of the report and director of the Knight Alzheimer’s Disease Research Center in St. Louis.

While this development is exciting, Dr. Lisa Rush cautions against rushing to conclusions, citing the need to consider the importance of other critical factors including the aforementioned medical conditions as well as other environmental and social differences such as access to healthier foods and better health literacy. But it is a promising step in much-needed advanced research. 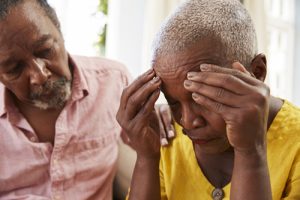 One big reason Alzheimer’s appears to take a higher toll on the African American community is simply the stigma of having the disease. “In our community, you don’t talk about it. By the time it is clear something is wrong, you are two to three years in. The things you could have done to prepare family financially and emotionally don’t happen until you are in the late stages”, said Rushern Baker III in a recent article published in USA Today. He began noticing changes inwife, Christa, in her late 40s. Now 58 years old, Christa is unable to walk, talk, or eat unassisted. Mr. Baker admitted that he was afraid of what people would say, and eventually stopped bringing his wife to church to avoid uncomfortable questions.

Schekesia Meadough, BSN, RN, says she sees it often in the African American community. “Often times we tend to attribute forgetfulness to just another sign of ‘old age’, and when Alzheimer’s is finally accepted, we don’t always want to seek assistance outside of the family,” says Mrs. Meadough.

The cultural differences in how the diagnosis is handled are beginning to change, but we have a long way to go before it can truly come out of the shadows earlier in the disease process.

By 2030, the African American population age 65 and older will increase by 114% which suggests an exponential growth in Alzheimer’s diagnoses among this community is coming. It is imperative that we address the disproportionate prevalence of so many risk factors on this population before it is too late.  While we’re beginning to see a shift in the cultural awareness and acknowledgment of the disease among African Americans, the need for more research is urgent and long overdue.